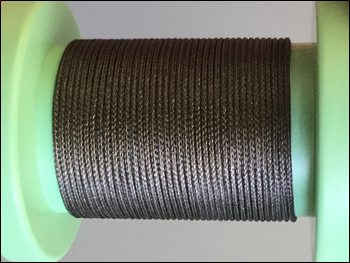 This is the second in a set of two articles that describe how thin filaments of carbon nanotube (CNT) fiber can be combined into larger yarns or ropes. In the first part we covered yarns assembled with a twisting and plying method. In this second part, we will discuss yarns assembled with a braided construction and the ongoing challenge of finding the right yarn construction style for each of the wide variety of applications in which CNT yarns might be used.

In our previous post, we discussed some of the basic qualities of yarns made by twisting and plying bundles of fibers together. In a plied yarn the fact that the filaments are twisted around one another allows the yarn to stretch further under tension than the individual fibers might be able to; this is a benefit for applications in which stretching is required, but can be a drawback for applications in which high stiffness would be better. The twist can also impart additional tensile strength to the yarn, so long as the number of twists per inch is not too high. We also described how plied yarns are prevented from untwisting spontaneously by a balance of elastic forces, but are nevertheless susceptible to unraveling if they are repeatedly twisted back and forth while they are handled.

One of the motivations for making braided yarns is to avoid some of the drawbacks of twisted yarns. For example, a braided yarn has a higher resistance to unraveling and can be subjected to twisting in different directions without weakening. It may also have a greater resistance to abrasion, depending on how tightly the outer jacket of the braid is woven and what style of material is used for these outermost braided yarns. Another advantage of braided yarns is that larger diameter braided yarns can be produced without sacrificing density and conductivity. As plied yarns become larger, it is harder for them to achieve a compact round shape, leading to an effective density that becomes lower (if one considers the diameter of the space into which the yarn can fit). Braided yarns are more effective at maintaining a round shape, and can be made with a very dense core, if desired.

Below, we will elaborate on how the construction of braided yarns can lead to these various benefits.

A braided yarn is constructed by weaving a collection of fiber bundles, called carrier yarns, together into a cylindrical jacket; the carrier yarns are passed over and under one another as they are drawn together, forming a structure that will not easily unravel. The braided cylinder may be hollow, or the braid may be formed around a core yarn to fill out the shape and provide more strength and density (and, in the case of CNT fiber or other conductive material, more electrical or thermal conductance). 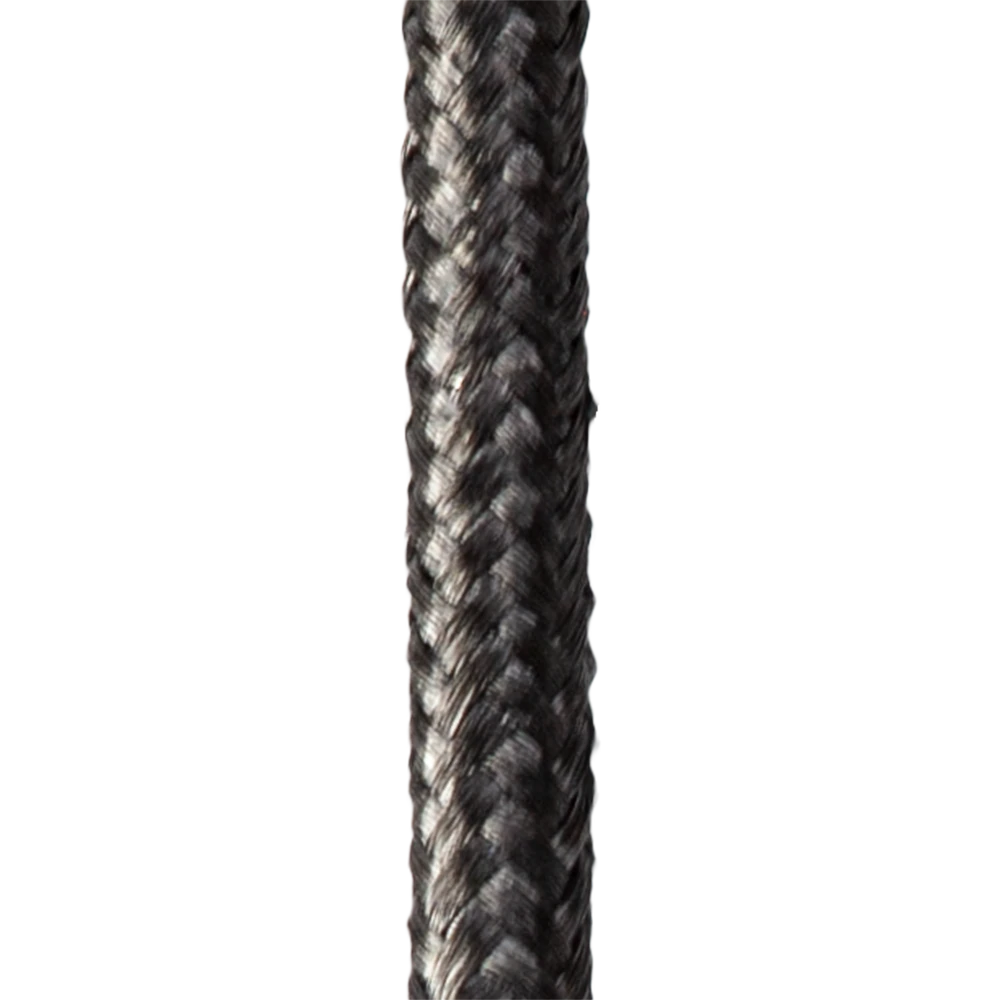 The video below demonstrates how this structure is formed on the maypole-style braiding machine currently in use at DexMat. We start by placing several bobbins containing the carrier yarns on a carousel at the base of the machine, below a collection point and collection wheel. Threads from each of the bobbins are drawn up through the central collection point and anchored to the collection wheel. The carousel has two tracks that move in opposite directions, crossing one another several times; when the machine is operated, it causes the two sets of bobbins to weave back and forth past one another as they orbit in opposite directions around the central axis. The movement of the bobbins causes the carrier yarn threads to be woven together into a braid as they are pulled up by the take-up wheel. If a core yarn is to be included it will also be drawn up by the take-up wheel from a central spool, passing through the center of the rotating carrier yarns. 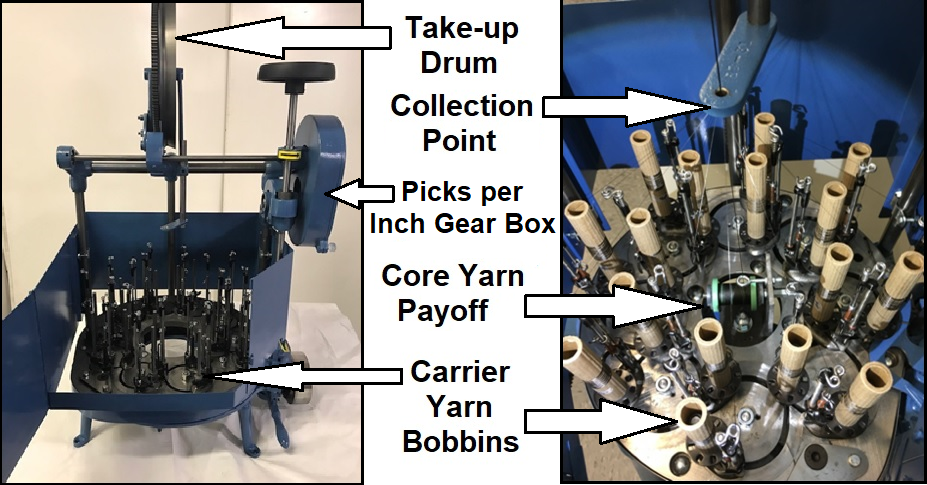 Several parameters can be adjusted in order to produce braids with different sizes or characteristics.

Firstly, the number of carrier yarns can be changed; the machine that is currently in use at DexMat is appropriate for 8 or 16 bobbins, but other machine styles allow an even higher bobbin count. Our machine produces a pattern that is known as the standard round braid. With 16 bobbins the carrier yarns will be woven with a “2 under, 2 over” pattern; with 8 carriers we get a ‘1 under, 1 over’ pattern.

Secondly, we may decide whether or not to use a core yarn in the center of the braid. A braided yarn without a core might be useful in some circumstances, as it may be more flexible; however, it will not have high density and will not keep a round shape while bending; it will also lack stiffness and will stretch relatively easily. If a core is included, then the properties of the resulting braid will be strongly affected by the way that core is constructed.

There are three main core variations that we can choose from. The first is to have a core that consists of another, thinner braided yarn; this is typically referred to in the industry as a double braid. The advantage of this construction is that it is possible to match the construction of the inner and outer braids to ensure they have a similar amount of elongation to break, thereby ensuring that they will share stress evenly when the yarn is put under tension. This is a way to maximize the tensile strength of the yarn, because all of the material will contribute to the tensile strength. The second variation we can use is to have the core consist of a collection of straight fiber filaments collected together into a bundle, with the carrier yarns braided around it to hold the bundle together; this is a variation on what is referred to in the industry as a kernmantle braid. In this case there is a large mismatch between the elongation of the core and the braided sheath, so the tensile strength of the yarn might come only from the core; the braided sheath is there to keep the core bundle densely packed and to protect it from abrasion. This construction is beneficial for applications in which high tensile stiffness, not stretchability, is desired. For CNT yarn that is to be used for electrical applications, this construction will also maximize the conductivity of the braided yarn by providing a large number of straight pathways for current to flow down the center of the braid, and by maximizing the packing density of the filaments. A kernmantle braid with a bundled core has a drawback, however, in that the core is quite soft and deformable, meaning that this style of yarn might not keep its shape easily. The third option is a variation on this kernmantle construction in which the core consists of one large plied yarn, or a collection of smaller plied yarns bundled together (similar to the braid shown in the photo below). This does not achieve quite the same level of density, tensile modulus, or conductivity as an un-twisted bundle core, but it holds a round shape more easily. At the time of this writing, the braided yarns that are available on the DexMat store are typically constructed with a single plied yarn core (with varying diameters). 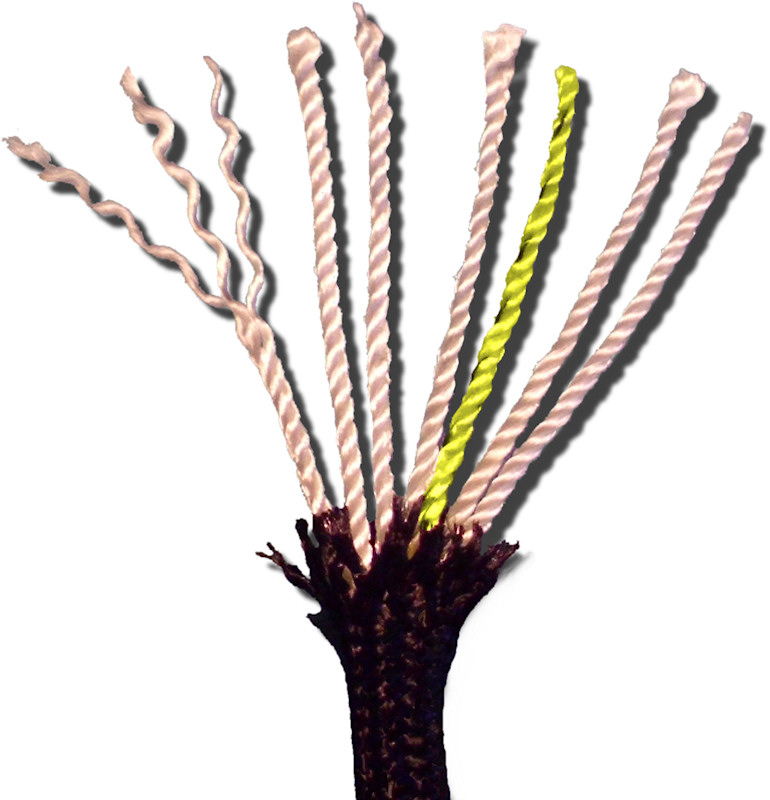 Thirdly, the diameter and construction of the carrier yarns themselves can be varied in a number of ways. Obviously, the size of the yarn produced by the braiding process will be strongly determined by the diameter of the core wire and the diameter of the carrier yarns. One of the limitations of Galvorn braided yarn, as compared to our twisted yarns, lies in this area: we are not easily able to make braided yarns 500 microns in diameter with our current equipment. This limitation arises because of the tension required to properly run the maypole braider; carrier yarns below a certain minimum strength threshold cannot maintain this tension. This is not an inherent limitation of braided yarn construction however; smaller braided yarns with thinner material can be made with the right equipment, so thinner Galvorn braids may be available in the future! 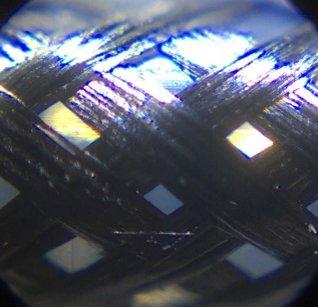 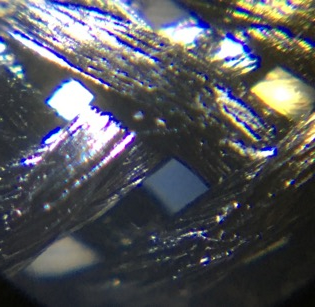 The photos above illustrate braids with large void spaces in between each carrier yarn. The last major parameter to be considered in braiding is one that determines the size of these voids. Just as plied yarn can be made with a varying number of twists per inch of yarn (TPI), a braid can be made with a varying number of over-under crosses of the carrier yarns per inch of final braided yarn; this parameter is referred to as picks per inch, or PPI. The PPI of a braid can be adjusted by changing the relative speed of the bobbin carousel and the take-up wheel. The PPI can affect several characteristics of the braid, including how rigid it is when bent, how well it holds a round shape, how well it will resist abrasion, the tensile modulus of the braided sheath, and even the final density and diameter of the braid. We have observed that for CNT yarns, it also affects the conductivity of the braided yarns (possibly a side effect of the effect it has on yarn density). 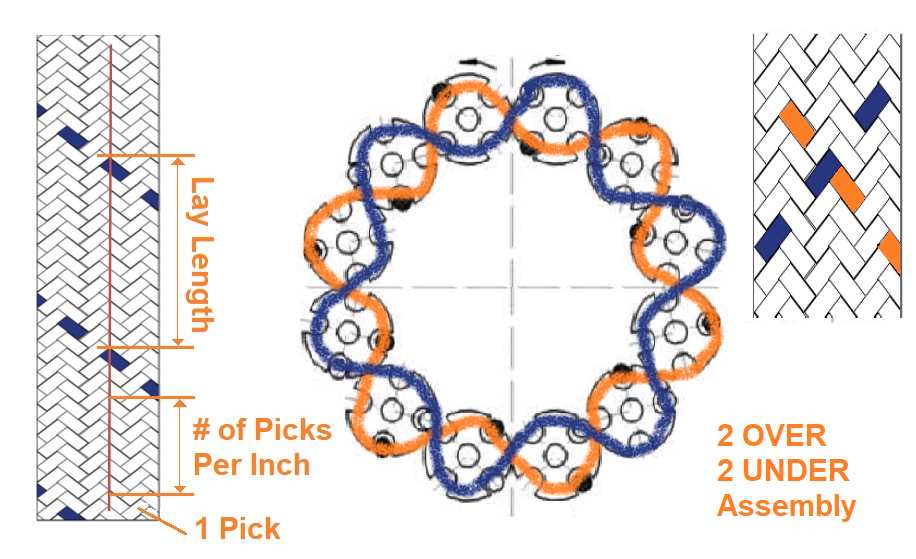 Optimizing CNT Yarns for a Universe of Applications

In this two-part series, we have highlighted the parameters that can be varied and choices that can be made in the production of Galvorn CNT yarns. So, which is the best format for our product? The answer to that may depend greatly on the type of applications that Galvorn is used for in the future!

In the conventional yarn and rope industries, the most important qualities of the material are all mechanical: the flexibility of the yarn, its tensile strength, its stretchability, etc. Different styles of plied or braided yarn have been developed to optimize products for needs of different applications. With Galvorn CNT yarn, the picture becomes more complex, because our intention is to make a product that will eventually be used in some cases for its mechanical strength, and in other cases for its electrical or thermal conductivity. As we develop Galvorn further and optimize it for different markets, we expect to develop different styles of yarn that will allow us to emphasize different properties of our Galvorn CNT fibers.

In the meantime, you can check out the current state of the art in Galvorn CNT yarns by following the link to our store below!