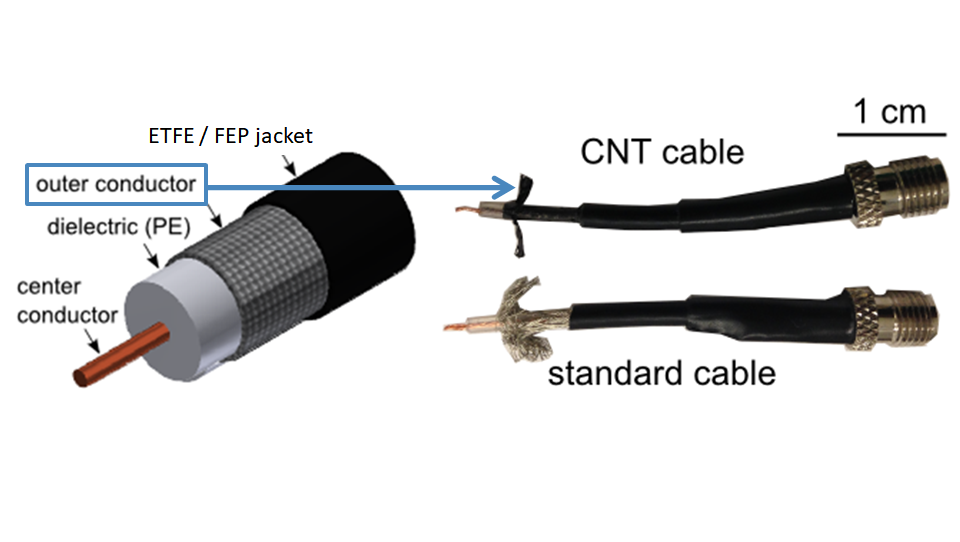 Common coaxial cables could be made 50 percent lighter with a new nanotube-based outer conductor developed by Rice University scientists.

he Rice lab of Professor Matteo Pasquali has developed a coating that could replace the tin-coated copper braid that transmits the signal and shields the cable from electromagnetic interference. The metal braid is the heaviest component in modern coaxial data cables.

The research appears this month in the American Chemical Society journal ACS Applied Materials and Interfaces.

Replacing the outer conductor with Rice’s flexible, high-performance coating would benefit airplanes and spacecraft, in which the weight and strength of data-carrying cables are significant factors in performance.

Rice research scientist Francesca Mirri, lead author of the paper, made three versions of the new cable by varying the carbon-nanotube thickness of the coating. She found that the thickest, about 90 microns – approximately the width of the average human hair – met military-grade standards for shielding and was also the most robust; it handled 10,000 bending cycles with no detrimental effect on the cable performance.

“Current coaxial cables have to use a thick metal braid to meet the mechanical requirements and appropriate conductance,” Mirri said. “Our cable meets military standards, but we’re able to supply the strength and flexibility without the bulk.” 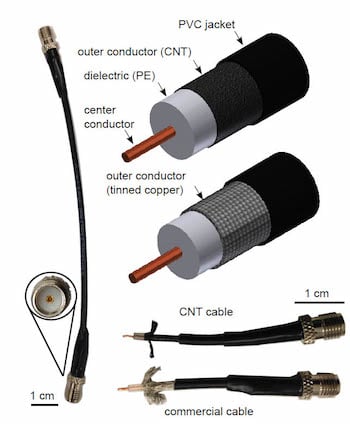 Coaxial cables consist of four elements: a conductive copper core, an electrically insulating polymer sheath, an outer conductor and a polymer jacket. The Rice lab replaced only the outer conductor by coating sheathed cores with a solution of carbon nanotubes in chlorosulfonic acid. Compared with earlier attempts to use carbon nanotubes in cables, this method yields a more uniform conductor and has higher throughput, Pasquali said. “This is one of the few cases where you can have your cake and eat it, too,” he said. “We obtained better processing and improved performance.”

She said the lab is working on a method to scale up production. The lab is drawing on its experience in producing high-performance nanotube-based fibers.

“It’s a very similar process,” Mirri said. “We just need to substitute the exit of the fiber extrusion setup with a wire-coating die. These are high-throughput processes currently used in the polymer industry to make a lot of commercial products. The Air Force seems very interested in this technology, and we are currently working on a Small Business Innovation Research project with the Air Force Research Laboratory to see how far we can take it.”

Co-authors are graduate students Robert Headrick and Amram Bengio and alumni April Choi and Yimin Luo, all of Rice; Nathan Orloff, Aaron Forster, Angela Hight Walker, Paul Butler and Kalman Migler of the National Institute of Standards and Technology (NIST); Rana Ashkar of NIST, the University of Maryland and Oak Ridge National Laboratory; and Christian Long of NIST and the University of Maryland.

Pasquali is the A.J. Hartsook Professor of Chemical and Biomolecular Engineering, chair of the Department of Chemistry and a professor of materials science and nanoengineering and of chemistry.

The research was supported by the Air Force Office of Scientific Research, the Air Force Research Laboratories, the Robert A. Welch Foundation, NIST, the National Science Foundation and a NASA Space Technology Research Fellowship.