Conductive wires made from carbon nanotubes (CNTs) have the potential to serve as lightweight replacements for metal wire in a variety of applications, including aerospace cables, motor windings, wearable electronics, and biomedical implants. Many of these applications involve devices that need to operate at elevated temperatures: for example, consider a heating element designed to warm a jacket or a pair of winter socks, or the wiring in an airplane that needs to land in the heat of the desert sun near the equator. It isn’t enough to know that CNT yarns and films can perform well at standard room temperature; it is important for us to understand how their performance might change when temperatures are very high or very low, and to know the ultimate temperature limits at which they will fail or be destroyed.

All electric conductors are affected by temperature. As it turns out, the structure of Galvorn CNT fibers and films, along with the electrical properties of the CNT molecules themselves, give them a temperature-dependent behavior that is somewhat different from that of a traditional metal wire. In this post, we will describe how Galvorn responds to changes in temperature (focusing partticularly on elevated temperatures) and how this response compares to that of metal wire alternatives. 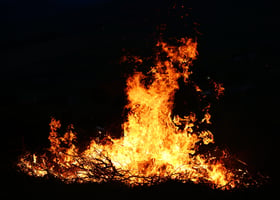 Almost all conductive materials will experience some change in their electrical conductivity as their temperature changes. A useful formula describing this phenomenon is described in this textbook section hosted by the All About Circuits community (note, the formula is an approximate way of describing material behavior, not a precise law). This formula is:

The changes in material conductivity described by this formula arise because the atomic and molecular vibrations arising from heat energy can make conduction electrons flow more slowly or more quickly through the material. The size and direction of this change is measured by a material’s temperature coefficient resistance, α, which is expressed in units of inverse degrees Celsius (i.e. the resistance changes by a certain amount for each change of 1°C in the temperature). Metallic conductors typically lose conductivity as temperature increases (they have a positive temperature coefficient of resistance), but for semiconductor and ceramic materials, including some forms of carbon, the opposite is true: their conductivity will increase as temperature increases (these materials have a negative coefficient of resistance).

In many electronics applications it is desirable for the temperature coefficient of resistance, whether it is positive or negative, to be small in magnitude; this means that the performance of a cable or a circuit will be more stable over a wide range of temperatures. The temperature coefficient of resistance for copper is 0.00404/°C, but in other metals the coefficient can have a fraction of this value, or even become negative for certain alloys (see the list provided in the All About Circuits link above).

So, how does the value for Galvorn CNT materials compare to this? Although they are made out of carbon, it turns out that Galvorn materials behave like most metallic conductors, having a positive temperature coefficient of resistance – but with an added complication. When Galvorn is heated, there is an additional effect to be considered: the presence of electrical dopants.

Electrical doping and loss of dopant

CNT molecules themselves can be either metallic conductors or semiconductors; Galvorn fibers and films, like many structures composed of an aggregation of CNTs, contain both metallic and semiconducting types. While the metallic CNTs form enough of the structure to impart fairly good metallic conductivity, the semiconducting CNTs would not normally allow electrons to flow through them and would therefore normally act as ‘dead weight’ as far as the conductivity of the material is concerned; however, this situation changes if the semiconducting CNTs are electrically doped, allowing them to behave like metallic conductors. This kind of doping can be achieved without altering the molecular structure of the CNTs if certain chemicals are adsorbed onto the surface of the CNT molecules.

We achieve high electrical conductivity in Galvorn fibers and films using this technique: small amounts of dopant chemicals are present within the packed CNT structure. The addition of these dopants increases the conductivity of the material to approximately 3-4 times the value it would have if it were composed of CNTs with no added chemicals.

The dopant in Galvorn fibers and films is stable at room temperature and is not affected even at moderately elevated temperatures (up to around 100°C). However, if the material is held at temperatures much higher than 100°C, the dopant chemicals will begin to evaporate away from the CNT structure. Once this happens, the resistance of the material will undergo a permanent increase; the extent of that increase will depend on the temperature that was reached and the length of time that the sample remained in the heat. Galvorn will lose a fraction of its conductivity if it is heated to temperatures between 100°C and 220°C and will experience a much more significant loss of conductivity if it is heated to 250°C or higher. A few minutes of heating at around 300°C or higher is enough to remove most of the dopants; we have found that, in order to remove them completely, it is necessary to bake the material at 500°C for at least 4 hours (note: this should be done in an inert environment in order to avoid oxidizing the CNTs). 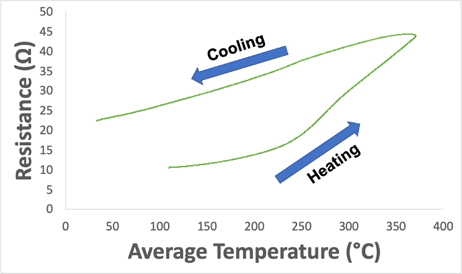 Considering the above, we note that Galvorn CNT fibers and films do not have a temperature coefficient of resistance that is absolutely well-defined when they are first used. When Galvorn is exposed to high or low temperatures the extent to which its resistance will change depends on how much it has been heated, and for what length of time; that change may not be linear or reversible.

There are two cases in which the conductivity of Galvorn materials will have a predictable behavior as a function of temperature. The first is any situation in which the temperature of a sample changes, but always remains low enough to avoid significant loss of dopant; in this case our initial tests indicate the temperature coefficient of fully doped Galvorn materials is approximately 0.002/°C (about half that of copper). The second is any situation in which the Galvorn sample has already been aggressively heated at temperatures around 500°C or higher in an inert atmosphere, in which case all of the doping agent will be removed without oxidative damage to the CNTs themselves. We find that Galvorn fiber that has been ‘baked’ in this manner has a temperature coefficient of resistance around 0.0012/°C (about one quarter that of copper).

These results indicate that if the temperature of the material is low enough that dopant is not lost, or if all of the dopant has already been removed, the conductivity of Galvorn has a relatively low dependence on temperature compared to copper.

Other property changes with temperature

Aside from resistance and conductivity, several other properties of Galvorn may be expected to change with temperature. We have not yet investigated all of these changes, but we hope to thoroughly characterize them in the future as we expand DexMat’s testing capabilities. For now, we will mention two of them briefly:

There are three important temperature limits for Galvorn CNT materials. These are:

We have already discussed the first limit, which arises because of the presence of electrical dopants. The second limit arises because CNTs will become oxidized and eventually burn if they are exposed to high temperatures while in the presence of oxygen (or another oxidizing agent). In normal air, this typically happens between 500°C and 600°C. Galvorn CNT products should therefore survive operating temperatures up to 500°C in an atmosphere of normal air, and they should be able to survive temperatures higher than this for short periods of time. We have not tested the long-term stability of Galvorn at temperatures above 400°C in air, but it is possible that at such temperatures the products will suffer a certain amount of permanent damage due to oxidation; this could result in a slow degradation of both the electrical and mechanical properties.

If Galvorn does indeed have a thermal limit that is higher than 1000°C, then it could be very useful as an electrical conductor in high temperature environments that normal metal wires cannot survive, so long as it can be kept away from oxidizers.

We hope that this information has been useful to those who are interested in using Galvorn materials at elevated temperatures!

If you would like to browse our CNT fiber and film products and try them out in your applications, please see the link below for our online store.

Using Methane to Make CNTs and Hydrogen: The Path to a Greener Future
0 replies